Yesterday, May 30, 2022, Microsoft released an advisory regarding a new vulnerability affecting Microsoft Office products. The new vulnerability has been assigned CVE-2022-30190 and the security community has been referring to it as ‘Follina’. Follina uses the Microsoft Support Diagnostic Tools (MSDT) to download and run malicious code. MSDT is a tool built-in to Windows that collects information to send to Microsoft Support to be analyzed and used to resolve support issues.

This vulnerability can be exploited using the Office remote template feature rather than relying on macros which most Office exploits rely on. A remote HTML file is downloaded from the template which in turn uses the MDST MSProtocol URI scheme to load and execute malicious PowerShell. The malicious code will be executed with the same level of privileges as the user who opens the document. This new method of executing malicious code was initially missed by Defender for Endpoint as pointed out by research Keven Beaumont. MSDT is supported by all Microsoft products so it is possible to use this exploit in other ways, such as directly from Outlook in a malformed email. 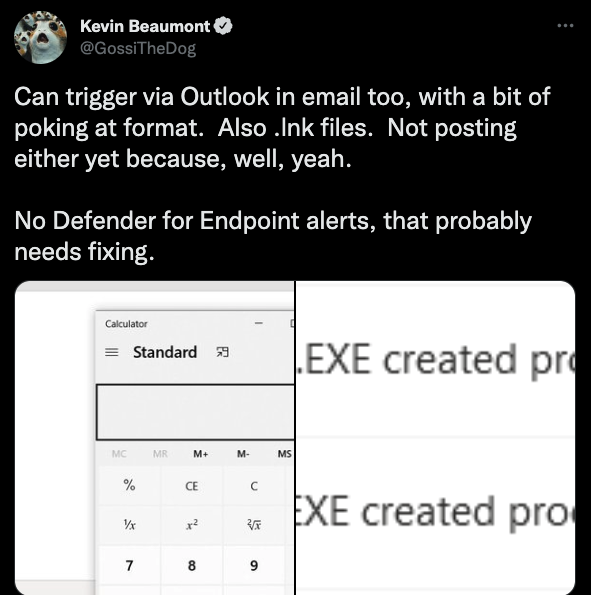 Follina first came to light publicly last Friday, May 27, when security researcher nao_sec tweeted that they had found a malicious Word document submitted to Virus Total from an IP in Belarus:

Microsoft later acknowledged that the vulnerability was originally reported by crazyman of the Shadow Chaser Group in April of this year but originally it was dismissed as “not a security issue” because MSDT requires a passkey for execution. However, since then it’s been revealed that a payload over 4096 bytes bypasses the need for a passkey and the payloads observed in VirusTotal are padded to meet that requirement.

Though there have been samples discovered in VirusTotal of documents exploiting Follina, so far no one has reported any active exploitation. However, several proof-of-concept tools have been released over the weekend making it trivial to reproduce this vulnerability and we will likely see several threat actors add this new trick to their arsenal.

This can be undone with the following:

The CRU has developed detection signatures based on samples we have collected that were published on May 13. For IDS users we added the following Suricata signature:

There is evidence that the Chinese state-sponsored APT TA413 has begun actively using this vulnerability as of May 30, 2022. 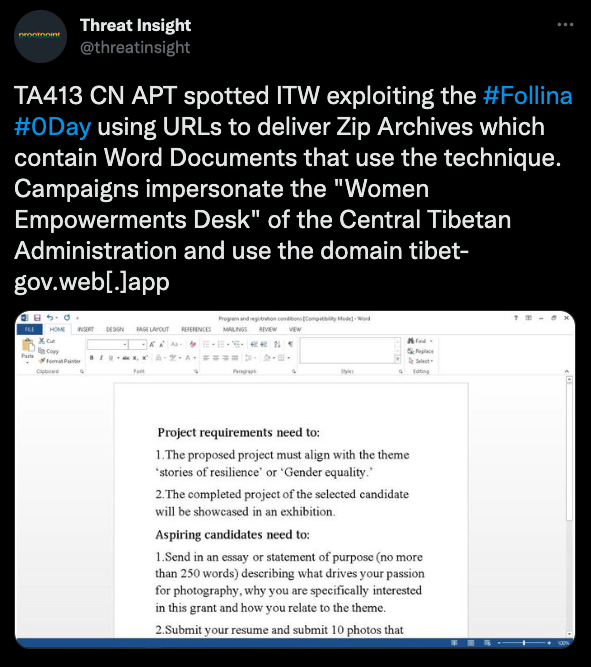