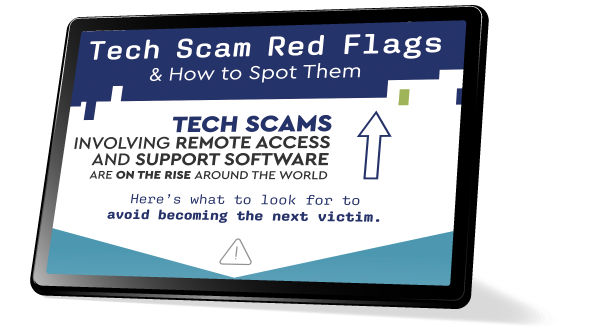 Tech Scam Red Flags & How to Spot Them

Tech scams are on the rise around the world. These are cybercrimes where someone poses as a representative from a recognizable tech company (think Apple, Microsoft, or HP) offering tech support services to unsuspecting end users.

Cybercriminals will often use legitimate remote support software for their nefarious purposes. Take a closer look at the tactics they use to trick their way onto peoples’ computers and devices.

Learn how to spot tech scam red flags
Get my infographic

Use these helpful resources to help others recognize the warning signs.

How to avoid remote support scams

If you work in the technology industry, it’s likely you’ve gotten a call from an upset customer who’s fallen prey to a tech scammer. Unfortunately, you know all too well how the story ends. Your customer is left feeling violated and confused. Now, they’re coming to you for help.

Help us protect you

If you think someone is using ConnectWise Control maliciously, please report it here. We take security very seriously and will investigate each report.

Explore a layered approach to remote access and support security using a combination of encryption, multifactor authentication, role-based permissions, and much more.