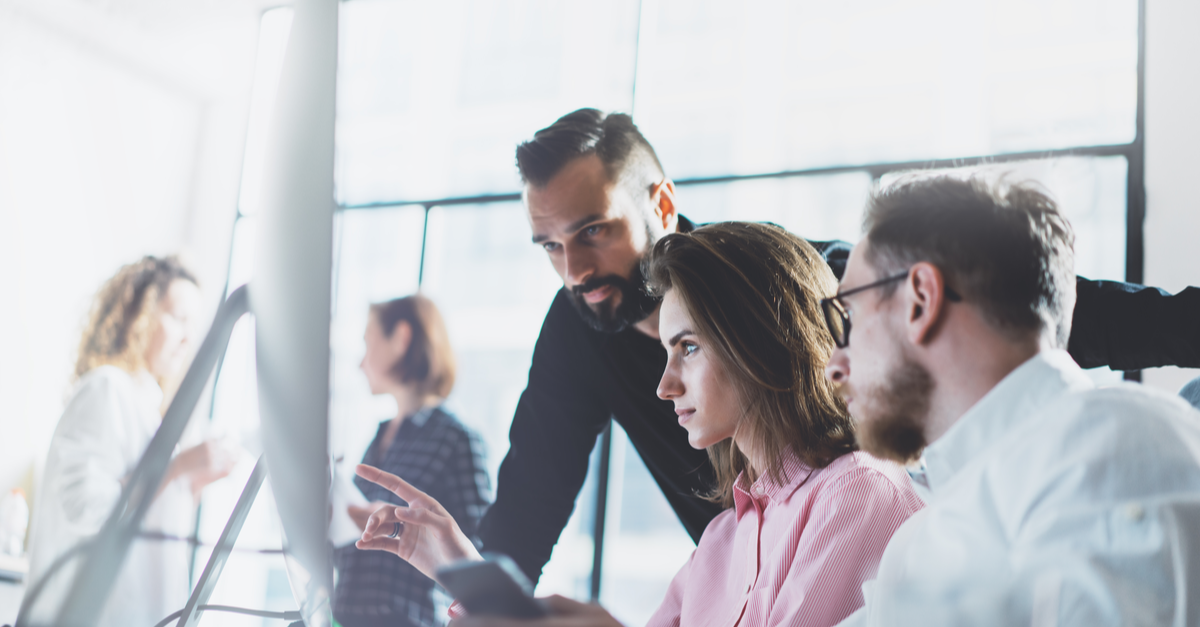 Tom Brady, Tiger Woods, and Lebron James. What do they all have in common?

The numerous championship titles, majors, or Super Bowl rings are the obvious answer, but there’s something else underlying all their success: practice.

But what are they, exactly? How do they operate and help MSPs with their work? Read on to learn all that and more.

What is a red team in cybersecurity?

Sports are an excellent analogy for this subject. Not only do they illustrate the need for practice, but they can help us further break down the concept of red team cybersecurity vs. blue team cybersecurity as separate sides of the same “game.”

In most sporting events, both teams need to play offense and defense. To better understand what red team security is, you may want to think of them as the offense. The role of this team is to launch coordinated penetration attacks to test the strength and coverage of an overall security system.

An IT professional will assume the role of attackers or threat actors to see what loopholes or vulnerabilities could pose a major threat by being exploited during a real-world attack. The goal here is not to hold anything back. Successful red team and blue team operations require the “practice attacks” to mimic what would occur in the real world as closely as possible.

For that reason, many organizations choose not to use internal staff to test their own system with red team and blue team cybersecurity drills. Companies will hire an outside consultant or third-party vendor to “attack” their system in several different ways. In doing so, they’re not only testing a system, but they’re also testing the employees’ ability to conduct themselves safely and securely as they perform daily operations on their individual end terminals.

Here are a few of the main attack types red team members will employ when testing systems:

What is a blue team in cybersecurity?

If the red team is the offense, think of the blue team as the defense of the red and blue team cybersecurity scenario. Their role is to respond to the attacks launched by the red team.

As the red team launches their attacks, the blue team should be working to strengthen defenses and take whatever steps necessary to enhance incident response. This means they’re responsible for responding to red team attacks, but they also need to handle much more.

The blue team is tasked with constantly strengthening the overall cybersecurity posture for your clients. In addition to defending against the red team attacks, blue team members also need to remain ever-vigilant of unusual or suspicious activity.

To do this effectively, blue team cybersecurity squads will employ one or more of the following tools:

What are the differences between red team and blue team security?

For red team and blue team cybersecurity efforts to be effective, they need to work together. Both teams are different and view the overall cybersecurity infrastructure through their own unique lens. Together, they both play pivotal roles in strengthening cybersecurity systems at large.

While red team cybersecurity is focused on offense and exposing cybersecurity vulnerabilities and loopholes, blue team measures are focused on constant monitoring and protection. The blue team’s continuous monitoring is valuable for the long-term strength and health of the system and making sure defenses remain strong.

Although valuable in determining vulnerabilities, the red team doesn’t have the same holistic view. The loopholes and exposures they discover within a client’s system are critical for informing the blue team’s defense strategy. Still, the red team only operates from a current, “present-moment” view of a company’s cybersecurity measures.

What skills do red and blue cybersecurity teams need?

Since both teams provide their own unique perspective to your clients’ overall cybersecurity, it would stand to reason that each team requires its own set of skills to be effective.

Red team members should be able to:

Since members of the blue team are approaching cybersecurity from a completely different angle, effective blue team members should be able to: 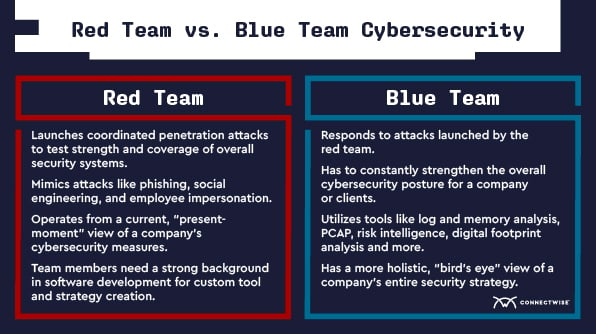 What is a purple team?

When red team and blue teams come together to provide an airtight blanket of cybersecurity, this is known as a purple team.

When should you run red and blue team cybersecurity exercises?

Red team and blue team cybersecurity exercises should be scheduled regularly. Many cybersecurity attacks and threats go undetected for a long time – much longer than they should.

Research shows the average dwell time for threat actors is on the rise. This means your clients’ network infrastructure or sensitive customer data can be exposed more than long enough for hackers to take advantage.

By allowing hackers to remain in a system this long, you may be allowing them to create multiple backdoors into the system or other points of access. Red, blue, and even purple team cybersecurity efforts are essential in preventing these damaging IT events before they start.

Why do MSPs need red and blue teams for cybersecurity?

Managed service providers (MSPs) should be leveraging red and blue team cybersecurity measures to ensure the best service possible for clients. Not only do regularly scheduled red vs. blue team exercises strengthen security, but they also minimize your team’s workload as an MSP.

By running red vs. blue team exercises, you engage in proactive security measures. Loopholes, vulnerabilities, and dwell times will be minimal, and threat response will be well-equipped to stop attacks and breaches before they cause significant damage. As an MSP, you’ll be left with happy, protected clients and a happy internal staff who’s not overworked and can devote their time and energy to the most important tasks.

Red team cybersecurity and blue team cybersecurity are essential parts of your overall IT framework. Done correctly, your clients can leverage red and blue team exercises to increase threat response, better protect your digital assets, and proactively manage your organization’s network protection. And, as an MSP, satisfied clients are the surest way of winning yourself more business.

Want to learn more? Check out our cybersecurity management cheat sheet for more information or contact a ConnectWise representative today.

What is the role of the red team in cybersecurity?

What is the role of the blue team in cybersecurity?

The blue team’s goal is to secure and strengthen an organization’s cybersecurity defenses. They are responsible for responding to the threats launched by the red team, constantly monitoring long-term cybersecurity protocols, and improving overall threat response