Curve jumping: what to expect, common problems, and ideal solutions 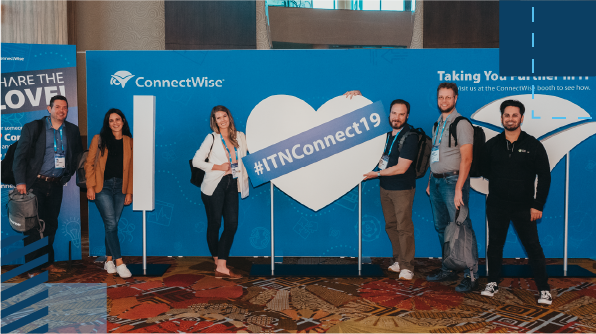 Businesses typically experience a spike in growth in the beginning stages of operation. When you first start your business, it’s both fun and challenging. Everyone is getting along, and you’re making money. But the biggest challenge that comes into play is being able to recognize when you’ve hit the plateau.

So, what is a plateau?

The tricky thing about reaching plateaus is that they can be difficult to recognize initially. This is because the top of the plateau feels the same as when your business is in a period of growth. Often, you won’t realize that you’re in the plateau until you hit the decline—and then, it’s too late.

A model example of this situation is Blockbuster. Once a popular movie rental company, Blockbuster had the opportunity to buy Netflix at their plateau—but they passed on the opportunity, not realizing their business was about to reach a decline. This was before Netflix had streaming services as we know it today and was mailing out DVDs for a monthly membership fee. Blockbuster made decent money from late charges, but Netflix wasn’t charging late fees and started to become more appealing as an affordable video rental service.

Unfortunately for Blockbuster, they hit a very steep curve decline and, at that point, couldn’t, switch their business model to keep up with the changing times. Without the late charges, their company wouldn’t be profitable. This is a prime example of the world catching up with a business model that didn’t change, causing the business to go under. 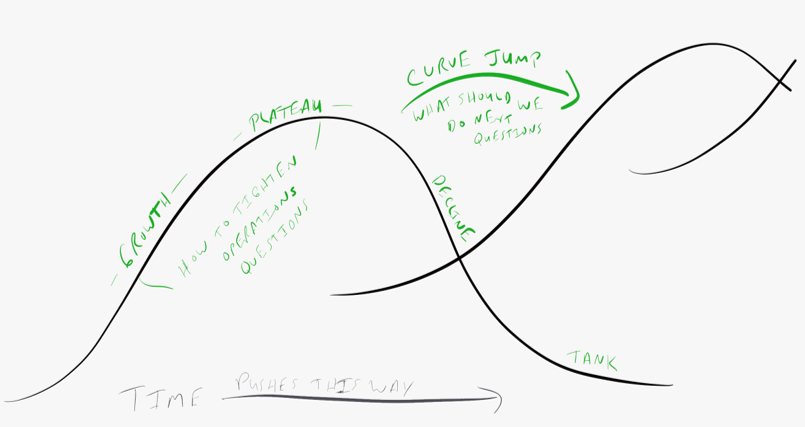 Determining the next curve

Something to keep in mind is that plateaus often occur when business leadership spends too much time focused on keeping the wheels of the business moving in the present, that they can’t think of what should come next. This puts them in a position where they’re constantly afraid they’re in a plateau.

It’s during a decline when you are usually figuring out where to go next. From here, your options are to either curve jump, or tank. This is why business leadership needs to be proactive and figure out how they get to the next curve.

Jumping the curve should be viewed as a new approach to what you’re doing. Since the first part of the curve is stable and predictable as the business grows, people often want to backtrack to the same growth curve instead of leaping forward to find a new one. Your business needs to make forward movement—it’s counterproductive to try to salvage a curve that has been outgrown. The question shouldn’t be, “How do I get back on the same curve?” but rather, “How do I find the new curve?”

After you curve jump, you can scale and operationalize your business to the new dynamic and the growth will follow.

Why you have to make the leap

Curve jumping can be uncertain and risky—but as time keeps pushing on, if a business doesn’t jump the curve, they run the risk of becoming obsolete. Not only is this an operational risk, but a management risk as well. Businesses need a certain leadership bandwidth so they can proactively predict the next curve.

Since some people are wired to think creatively, personality differences can arise and cause people to butt heads when trying to figure out the next curve. Because both operational and creative leadership is critical to business growth through each curve, smaller business owners must wear multiple hats until they get a big team.

What comes after a curve jump?

Everything isn’t always sunshine and roses when you hit your next curve. Often, once you hit a new curve, it’s very common that people, process, leadership, and management challenges become more apparent. It’s great that the business is growing, but as you scale, the size of the current problems also increases. If there’s an increase in revenue, there’s bound to an increase in problems as well.

An example of this dynamic can be seen in service tickets. When your business is small, you don’t need extensive documentation. When you grow and reach say, 10 techs, then you need to start documenting in order to adequately keep track. Then you add a dispatcher who assigns techs to work on tickets—but the service techs don’t know what’s going on, and customers start to get upset that their tech isn’t familiar with the issue. Then, the techs move into service pods and people get siloed. Hence, the root of the problem stays the same, but the solutions get more expansive and expensive.

The bottom line: don’t get too comfortable

If you ever get to a point of feeling settled, something is wrong. Curve jumping is about learning how to deal with the current challenges your business is facing versus trying to make the challenges magically disappear.

Don’t cover up your business problems—we’re here to help you solve them. If you’re looking to gain further insight on curve jumping and business growth for long-term success, join us and over 3500 IT professionals at IT Nation Connect this month. Your business will thank you.